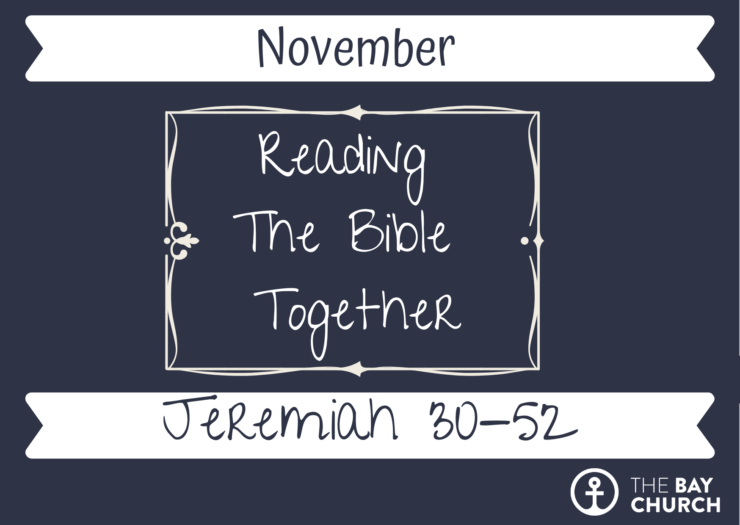 The information below can be downloaded here. (Download PDF) there are attitional notes on some relevant dates for Jeremiah here (Download PDF)

The prophecies contained in this portion of Jeremiah were all given at some time, during the reigns of the last kings of Judah (Jehoiakim, Jehoiachin and Zedekiah) or in the period immediately after the fall of Jerusalem. However, they are not in chronological order but rather ‘totally muddled up’. The reading plan indicates in which reign the individual prophecies were given.

After the death of godly Josiah, killed in battle by the Egyptians, the land came under Egyptian rule. Jehoahaz was deposed and Jehoiakim set up as puppet King (609BC). In 605BC Nebuchadnezzar defeated the Egyptians and later besieged Jerusalem. Jehoiakim paid tribute to and became a vassal of the Babylonians. At that time many members of the royal family and nobility, including Daniel, were taken to Babylon. After three years, Jehoiakim revolted, switching allegiance back to Egypt.  In 598BC Nebuchadnezzar invaded Judah and laid siege to Jerusalem. Jehoiakim died and his son Jehoiachin ruled in his place. Following their inevitable victory, the Babylonians took Jehoiachin as a prisoner into exile and appointed his uncle  Zedekiah to reign in his place. A great number, including members of the royal family, men of valour and craftsmen were taken into exile. 2 Kings speaks of ten thousand captives being taken.

From the beginning of his reign wicked King Jehoiakim led his people further and further into idol worship. Worship of the living God deteriorated into mere superstition and outward formalism.  At this time Jeremiah preached in the gate of the temple, denouncing the false belief that the presence of God’s temple would protect Jerusalem from destruction  (see chapters 7 and 26). Seized by the people and officials, who all called for his death, Jeremiah was freed but could no longer preach openly in the temple or elsewhere. Chapter 36 tells how the Lord commanded Jeremiah to record all his prophecies in writing. This he did by dictating them to Baruch, his faithful scribe, who wrote all his words on a scroll. Jeremiah chapters 1-7 are thought to record the contents of the scroll. Baruch read this firstly to the nobles and then to the King in person. As the scroll was unrolled Jehoiakim showed his contempt for God’s word by repeatedly cutting off the top of the scroll and throwing it onto the fire. God’s word is not so easily dismissed. The Lord simply commanded Jeremiah to have all the words the King had sought to destroy recorded on a new scroll. “And many similar words were added to them.” Included in this was God’s judgement on Jehoiakim and his family. Chapters 1-10 probably contain the writing on the new scroll.  Chapter 45 records God’s special message to the scribe Baruch, telling him not to seek great things for himself but assuring him of God’s protection in the coming days.

Jeremiah’s consistent message saying God was bringing judgement on Judah and his advocating submission to Babylon led to most of the nobles regarding him as a traitor. Indeed at the time of the final siege it was thought he might defect and flee the city to join the Babylonian enemy. Zedekiah , however, seemed to have a secret but superstitious respect for the prophet, accepting that he was God’s true servant.  In spite of this, the King greatly feared his nobles and generals and did not dare to oppose their determination to continue revolting against Babylonian rule.

About 589BC, following the accession of a new Pharaoh in Egypt, intrigue against Babylon increased. Soon Jerusalem was under siege from the ever powerful Babylonians. Fear led the Jewish nobles to cry to God for help, releasing their Hebrew slaves in order to gain His favour,(see chapter 37) Their ‘repentance’ was short lived and when the siege was raised the freed slaves were forced to return to servitude. During the brief ‘breathing spell’ Jeremiah was seen as a false prophet and a traitor. At the time when the enemy army had withdrawn, Jeremiah set out for his home town of Anathoth. Arrested at the city gates and accused of planning to desert to the Babylonians, he was taken and thrown into a deep and muddy cistern. (Chapter 38).  Ebed-melech, an Ethiopian eunuch, hearing of this wickedness,  sought the King’s help.  Granted thirty (armed?) men he succeeded in rescuing the prophet, and taking him to the safety of the guards’ courtyard, where Jeremiah remained in comparative safety.

Some time after this, Zedekiah sent for the prophet, meeting him privately at one of the entrances to the temple. The King swore he would not  have him either executed or handed over to his enemies.(Chapter 38)  Jeremiah gave the King God’s promise that if he surrendered to the Babylonians his life would be spared and Jerusalem would not be destroyed by fire. However, if he did not surrender the prophet recounted in some detail the judgements which would fall on Zedekiah, his family and the nation.

Zedekiah instructed Jeremiah, on pain of death, to tell no-one the words Jeremiah had spoken to him. Rather he was to say that he had pleaded with the King not to send him back to die in the house of Jonathan. Jeremiah complied with the King’s command and remained in the guards’ courtyard until the city fell.

The King did not surrender, disobeying God’s words brought to him by Jeremiah. Consequently the judgements threatened by God came down. The city and temple were sacked. Having seen his sons executed before his eyes Zedekiah was blinded by the Babylonians and taken in chains into exile.

Jeremiah was freed at Nebuchadnezzar’s command. He was free to go wherever he pleased. He could go to Babylon, remain in Judah or go elsewhere. He chose to remain with the remnant of poor people left in Jerusalem, placing himself under the protection of the governor appointed by the Babylonians. This governor was subsequently murdered and the people, fearing Babylonian revenge, fled to Egypt. Jeremiah was compelled to go with them and he continued his prophetic ministry there.  Chapters 42-43 detail Jeremiah’s warning against going to Egypt and the people’s sin in disobeying God and fleeing there. Chapter 44 was spoken to the Jews now living in Egypt warning them against the sin of idolatry. Chapters 46-51 contain prophecies of God’s judgement on Babylon and other surrounding nations.

Jeremiah ended his life and ministry in Egypt. Chapter 52 was added to complete the account of the exiles who were taken to Babylon. This historical appendix was written at a later date ( See Jeremiah 52:31) and may well have been derived from 2 Kings 25.