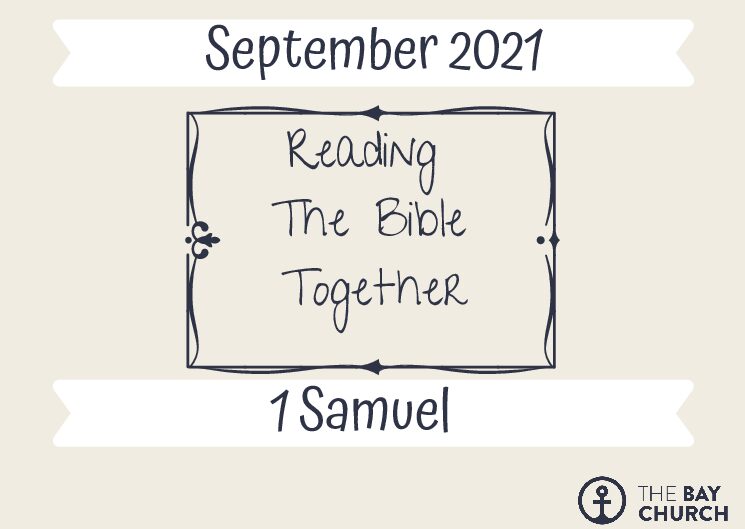 The books of 1 and 2 Samuel were originally one book as they appear in the Hebrew Bible. The reason for the division seems to be that the Book of Samuel was too long to fit on one scroll. (In RBT we read 2 Samuel, telling of King David’s reign as king, near the beginning of the scheme.) 1 Samuel records the establishment of Israel’s monarchy around 1050BC. The Jews believed that Samuel wrote the beginning of the book (see 1 Chronicles 29:29) recording the events up until the time of his death (1 Samuel 25:1) and that the rest of 1 and 2 Samuel were completed by the prophets Gad and Nathan.

Samuel was the last of the Judges raised up by God to lead Israel in difficult days. He combined this role with that of prophet [bringing Israel God’s word] and also that of priest [representing the people before the Lord]. He was the bridge between the time of the judges and that of the monarchy, which he was instrumental in establishing.

Samuel was born in answer to his mother Hannah’s prayers, who, in deep gratitude, gave him as a young boy, into the Lord’s service in the Tabernacle at Shiloh. During this period he was called by the Lord to take a message of judgement to the aged priest Eli. As Samuel grew, God was with him and he was established as a prophet of the Lord God being recognised as such by all Israel.

However, Israel was defeated in battle and the Ark captured by the Philistines. Eli and his sons died under God’s judgement (his sons in battle and Eli on hearing the news). The Lord afflicted the Philistines and caused the return of the Ark. Samuel called Israel to repentance and the people responded. Israel assembled at Mizpah, where Samuel offered sacrifice and prayed. Hearing of Israel’s gathering the Philistines invaded the land and were about to attack as Samuel was offering sacrifice. The Lord thundered with a mighty sound, which threw the Philistines in great confusion and they were thoroughly defeated. Much territory was freed from Philistine rule and they did not invade Israel again in Samuel’s days. Altogether Samuel was judge over Israel for forty years.

In his old age he appointed his two sons as judges. These two ungodly men took bribes and perverted justice. The Israelites then demanded that Samuel appoint a king to rule over them. They wanted a king such as the pagan nations around them had.  The Lord told Samuel to grant their request but to warn them of the great oppression a king would bring on the nation (see 1 Samuel 8:7-18). He said, “…they have not rejected you  but they have rejected  Me from being King over them.”

The Lord guided Samuel to choose and anoint a Benjamite named Saul as King. He was a fine looking man, being head and shoulders taller than the others around him. The young man went to ask the prophet for help in finding some stray donkeys and God revealed to Samuel that this was the man to be made king. Having been secretly anointed by Samuel, Saul was later chosen by lot at an assembly of all Israel. When the city of Jabesh- gilead was besieged by the Ammonites, Saul mustered an army and delivered the city, inflicting a great defeat on the enemy. Samuel called a meeting at Gilgal where Saul was confirmed as King and Samuel gave what is often termed his farewell speech. Careful reading of this shows the great sin of the people in seeking a king but the great faithfulness of God and Samuel.

Early in his reign Saul fought against Moab, the Ammonites, Edom, Zobah, the Philistines and the Amalekites and defeated them all. However Saul disobeyed God’s commands. He offered the sacrifice himself when Samuel was late in arriving before a battle (see ch13). Later God commanded him through Samuel to totally destroy all Amalekites and all their animals. When he disobeyed again, keeping cattle alive and sparing their king, Samuel told Saul that the Lord had rejected him as king.

The Lord told Samuel to go to Bethlehem and secretly anoint a new king. This was to be one of Jesse’s sons. The Lord passed over the seven older sons and chose the youngest, David, who was looking after sheep. “For the Lord sees not as man sees, man looks on the outward appearance, but the Lord looks on the heart” (1 Samuel 16:7). Samuel anointed David with his horn of oil. ”The Spirit of the Lord rushed upon David from that day forward.”

Chapters 16 -30 cover the concluding years of Saul’s reign but the focus is on David, the one secretly anointed to replace him as king. David was later to enter Saul’s service as a musician, playing the lyre to comfort the King when he was troubled by an evil spirit. He also served as an armour bearer and soldier.

When Goliath the Philistine champion mocked the Israelites no-one could be found brave enough to face him (including the King). However David famously defeated and killed him armed only with a sling and staff. David as Israel’s champion/covenant head prefigures the Lord Jesus Christ as our champion and is a clear type of our Saviour. Saul’s jealousy and growing conviction that David was the man who would become the new king, led him to persecute David and seek to have him killed. Despite ending up as a fugitive hunted by Saul’s army, David remained loyal to the King and refused to act against him. Twice David had opportunity to kill him but refused to do so. On both occasions Saul admitted that David was in the right but continued to seek to eliminate him.

In these later chapters we see a clear picture of David the man and king after the Lord’s own heart. There is much here which prefigures Jesus the true Servant King. David’s conduct through his many trials has much to teach believers as to how we should trust and serve God, even through extremely difficult circumstances. His human frailty and sins, such as twice fleeing to the Philistines, illustrate how the strongest believer is yet weak. His sinful anger when provoked by Nabal and his repentance brought about by Abigail’s wise words, show how the loving Lord keeps His children from great sin. Also God’s kind providence caused the Philistines to expel David and his men from their army, thereby saving him from any involvement in the war against Israel.

The final chapters show Saul, rejected by God, going to the witch/medium of Endor to obtain Samuel’s guidance by calling his spirit back from the dead. He and his sons were to die the next day in battle against the Philistines.

The opening chapters of 2 Samuel tell how, following these events, Judah and then all Israel welcomed David as king.

Outline and overview of 1 Samuel